A year ago, I had the privilege of joining three other autistic women to film a segment for a Channel 4 documentary.

The documentary, Are You Autistic?, which is airing at 10pm on Wednesday 28th March, opens the door to the world on autism and autistic people. It has been shaped by the input of autistic individuals; is hosted by autistic women, features autistic people, follows the story of two adults as they seek to find out if they are autistic, and details some of the struggles we face whilst also being full of laughter, happiness and pride in being who we are.

I attended a preview screening for contributors last week and, as nervous as I was about the final programme, I am so very proud of what everyone has acheived in making it.They have engaged with autistic criticism, shifted whole concepts on the back of autistic feedback, and rebuilt the show from scratch in some places because engagement with the autistic community.

In fact, a little while after my filming took place, the name was announced as How Autistic Are You? – but, after some critical words from within the community, including myself, they turned around and changed it to what it is now. That’s pretty much unheard of when it comes to autism-related media. That’s something to sit up and pay attention to.

You can check out this post by one of the show’s fabulous presenters, which neatly compiles all of the reasons why you should watch the programme.

The segment I’m in isn’t very long. In fact, I don’t think you hear me speak. But the segment is important in illustrating just how good some autistic women are at masking their neuroatypicality in social situations.

However, the documentary doesn’t show, understandably, the full eight hour experience of filming. It was an intense and worthwhile experience, and I think it’s important to tell that story.

Because the filming, which took place above a pub in London, was perhaps one of the most accessible events I have ever attended.

The production company, Betty TV, had previously consulted with, and been trained by, my friend and then-colleague Emily, and it was clear that they had taken everything she had said onboard. We were provided with clear instructions of what was going to happen and when; these instructions included pictures of the area and building, giving us time to get used to the visuals before arriving. We were encouraged to bring anything that we needed to make ourselves comfortable, and, once there, were asked where was most comfortable for us to sit, whether the lights were okay or needed changing, and were made to feel confident in voicing our concerns or needs.

When we came to a break in the filming, during which we ate in the pub downstairs (courtesy of the production team), they even persuaded the owners to turn off the music and the coffee grinder when it became too loud for us. They’d reserved us a secluded nook in the corner, where we could try to recover a few of our spoons. And, when it was finished, after they made sure we were okay after such a long day, they paid for taxis to pick us up and take us directly to our respective stations.

It was a long, tiring day, particularly considering the concept that we were playing with (‘speed dating’ with groups of men who didn’t know that we were autistic, demonstrating how we mask so effectively, and then, once the fact we are autistic is revealed to the men, sitting down with them and talking about it). But I look back at it so fondly. Not just because it was exciting to be a part of something like this, but because I don’t think I’ve ever felt more heard or safe.

Of course, the other reason I look back on it so fondly is that I found three amazing, inspiring, fabulous friends. 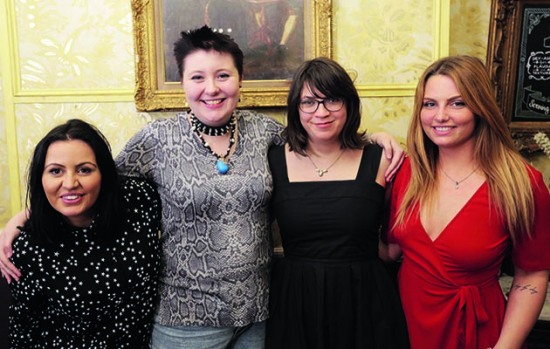 Carly, Me, Emily and Rose filming for Channel 4’s Are You Autistic?

This was the day that really solidified the importance of solidarity between autistic women for me. Although we all have very different journeys, there was an inherent undercurrent of understanding and acceptance. We could sit in absolute silence without anyone expecting us to speak. We could lose ourselves in excitement, talking about the things we love. We could talk and talk and talk and not make eye contact once, our eyes fixed on our phone screens, and no one thought we were being rude.

It felt wonderful to be a part of something with other autistic women. It felt even more wonderful to walk away with my life on a slightly different trajectory for having them in it.

The programme, as I have said, really is fantastic. It’s not perfect, of course – as much as it was constructed around autistic people and their voices, it is still a show about autism made by neurotypicals – but it feels desperately important. It feels like the beginning of something that’s been sorely needed for a very long time.

It feels like the start of an era of autistic stories told by, shaped around, and made by autistic people. It feels like the beginning of us being allowed to have agency over our own portrayal in a very mainstream, visible way.

And that, alone, is worth your time.

Are You Autistic? is airing at 10pm, Wednesday 28th March on Channel 4

One thought on “‘Are You Autistic?’ – Adventures In Filming for Channel 4”

what do you want to read about?